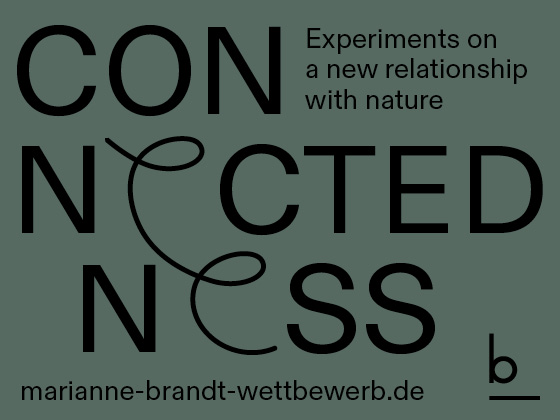 The 8th International Marianne Brandt Award 2022 asks artists and designers how that which connects us with other living beings and habitats can be newly discovered and designed. We are looking for projects, images, and texts on cooperative, aesthetic, metaphorical, and poetic exchanging relationships with other organisms and natural existences.

Could a perspective in which humans see themselves less as a counterpart to other living beings and habitats, but rather pay attention to similarities, familiarities, and mutual dependencies help establish new cooperative natural relations? How could we conceive and design connecting processes, objects, and atmospheres in this sense? How can we talk, write and tell about our existential connections in poetic and creative ways?

In the 1920s the Chemnitz-born artist and Bauhaus designer Marianne Brandt had written poems, in which she discovered forms of nature that appear like poetic and constructive role models for her shiny and geometric metal designs of “tableware” and “lighting bodies”. The sea appeared as a “shimmering round” or the moon as a “sculptural sphere”. At the same time, she searched for analogies in natural phenomena for her sensations and moods. Brandt found resonance in “sheet lightning” or in “rippling waves”.

What are the approaches to nature that are relevant for artists and designers today? How can we foster, show or celebrate moments that connect us?