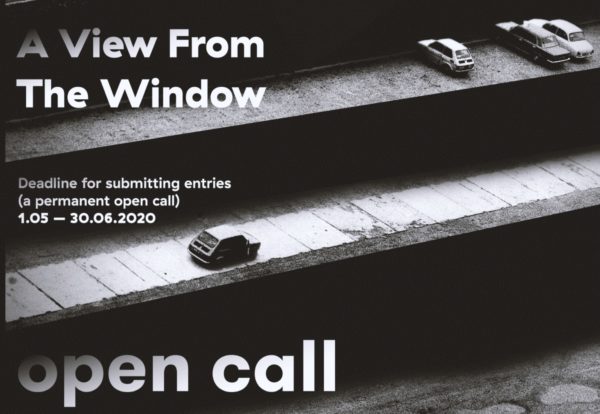 A photography competition for ‘a view from the window’ seems to be a trivial, if not a ridiculous idea. After all, the theme of looking out of one’s home is one of the most trivial motifs of art. Making it a point of reference for contemporary artists seems rather archaic. We are of course familiar with numerous examples of this motive in painting. One of them is ‘Woman at a Window’ by Caspar David Friedrich. The eponymous figure is looking out of the window with her back to the viewer, keeping her identity secret. This scene as mawkish and romantic as is it boring and dull. Nowadays, screens of tablets, computers, and smartphones are our windows on the world. The window returned as the main or the side motif in works by the ‘old’ and the ‘new’ masters like Vermeer, Picasso, Warhol, Hopper. Today, however, only few consider it ‘the mirror of the soul’ or the metaphor of art, as art theorists did until the late 19th century.

The outbreak of the SARS-CoV-2 has led to the greatest global crisis in post-war history. The epidemic is ravaging the world, including the world of art. Under these circumstances, ‘A View from the Window’ as a theme of the photography competition, though still risky, gains a completely different meaning. The seemingly trivial motif becomes dramatic and universal not in the symbolic, but rather in the real aspect. As we look for cultural references to this. We might, for example, refer to classics of cinematography. ‘Rear Window’, one of Hitchcock’s best films, tells the story of a famous photographer who, as a result of an accident, is stuck at his apartment. He tries to deal with his boredom by spying on his neighbours. It results with a series of events. Another example could be Poland’s classic video artists Józef Robakowski. One of his most famous projects entitled ‘From My Window’ (1978-1999), is a long-term video observation of a huge concrete square that spread in front of the high-rise where the artist resided. As the artist himself described it, the project transforms trivial reality into ‘a fascinating picture and an unusual historical documentary’.

The oldest surviving photographs such as ‘View from the Window at Le Gras’ (Niepce, 1826), ‘The Latticed Window’ (Talbot, 1835) and ‘Boulevard du Temple’ (Daguerre, 1839) are true icons of photography. They prove quite clearly that ‘a view from the window’ was a motif naturally selected by pioneers of photography who experimented with equipment and ‘mechanic images’ (Talbot, 1839) in the depths of their studios.

A photography competition inspired by the theme ‘a view from the window’ addresses the current situation of global quarantine forced by the outbreak of a previously unknown virus. The imposed safety restrictions locked millions of people in their homes. Quite unexpectedly and suddenly, the view from the window has ‘returned’ as a point of reference. What can we see from the window? What do the things we can see mean for us? What emotions do they evoke in us? Can screen be also regarded as a window? How do our perception, sense of time, and perspective change when we take a look from the intimate world of our fears, needs, dreams, and reflections? What do we feel when a window becomes a mirror…?

The following will prizes be awarded in the course of the competition:

- Main Prize (PLN 2,500)
- Audience Award (PLN 1,000 PLN)
- Please note that the amounts of prizes and awards are gross amounts. After signing a declaration, the winners will receive sums reduced by a 10% of tax paid by the Organizers to the Polish Tax Office.
- Audience Award – will be awarded to the author of the work that qualified for the competition and that received most votes in an online survey. This competition is a permanent open-call that will last until further notice. After initial selection, submitted entries will be published in the form of an online survey. The audience will have to possibility to view them and to vote for the best work.

This competition is open to professional artists as well as to students and graduates of art colleges and universities. Works that make references to the ‘national quarantine’ in an intelligent and creative way will be particularly well-received. There is a separate category for new, previously unpublished works.

By submitting an entry, the author declares that its public presentation will not infringe copyrights of any third party. The submitter will be held accountable for any claims that may arise.