Group exhibition on the theme REVELATION 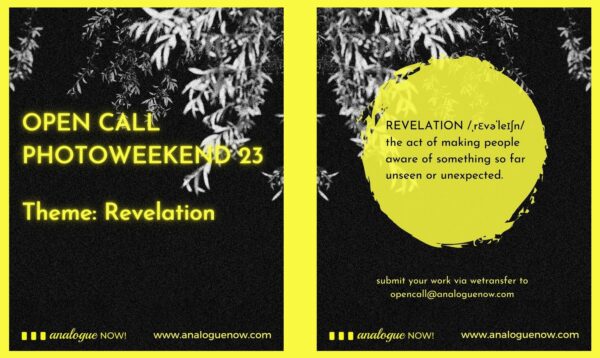 On the occasion of the 5th edition of PhotoWeekend, anaogueNOW! is pleased to invite film photographers and artists working with analogue techniques or hybrids to participate in their upcoming international group exhibition on the theme REVELATION.

The notion of REVELATION designates the fact of bringing to knowledge something previously unknown or hidden. The very principle of photographic development is based on the revelation of a latent image. In addition, as soon as they were discovered, photographic processes were perceived and described as techniques for recording reality, then quickly used in such a way as to contribute to a better knowledge of reality. One thinks, for example, of their scientific, historiographical or judicial uses.

From this notion deeply linked to photography as a technique, to its uses and to its perception in the collective imagination, the exhibition intends to question the probative power of photographic images, their capacity to make visible, as well as the other side of the coin, that is their misleading, deceitful potential.

The aim of the open call is to collect projects that bring forth unseen or unfamiliar topics and insights that will lead the beholder to experience a revelation, as well as projects that make the photographic act of revealing their subject. The theme can be understood in a straightforward approach or in an abstract sense. The exhibition will explore the alleged transparency, indexicality of analogue photography, as well as the social and political role that comes with it.

The group exhibition will take place from June 2 to June 4 2023 in the heart of Berlin-Neukölln. With the move of the festival from Lichtenberg to Neukölln a new chapter of analogueNOW! is being unfolded. With a new start comes a new structure, to secure the funding for artists and helpers the open call has a submission fee of 10€.

Photographers retain full rights to their own images. Photographers whose submission is selected grant analogueNOW! the nonexclusive right to use, print, and reproduce their images for the purpose of promoting the artists, the exhibition and its related programs, and subsequent display on analogueNOW!’s website, social media and online exhibition channels. Image credits will be provided with any use.