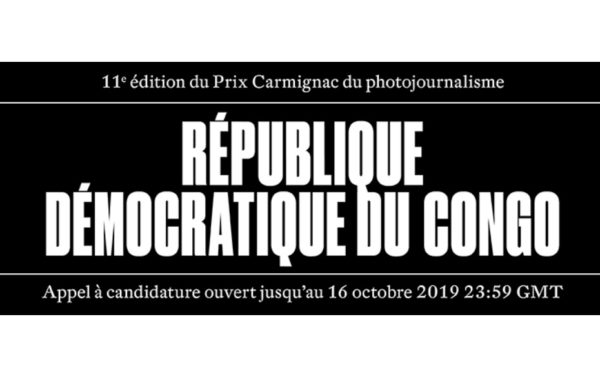 The 11th Edition of the Carmignac Photojournalism Award is dedicated to the Democratic Republic of the Congo (DRC) and to the human, social and ecological challenges it faces today.

Four times the size of France, this continent-sized country irrigated by the Congo River benefits from immense natural and mineral resources; the world’s lar-gest rainforest after the Amazon; the world’s largest producer of cobalt and coltan (metals which have strategic importance for our electronic equipment), the second lar-gest producer of diamonds… But the DR Congo, ripped apart by recurrent inter-com-munity and political conflicts, also accumulates misery, epidemics and clashes.

The DR Congo is one of the lowest countries in the Human Development Index (HDI) ranking. Its literacy level is rising, but public health is in a state of aban-donment, and violence towards women and children is endemic. Despite having the largest freshwater resource in Africa, it has the lowest level of access to drinkable water. It has one of the worst records in terms of transport infrastructure. It also tops the charts globally in terms of deforestation and the monopolisation of land and raw materials.

The Carmignac Photojournalism Award aims to support a journalistic and photographic project which will document these complex realities, but also address the grounds for hope for the 90 million inhabitants of the DRC, of which 60% are younger than 20 years old: education and public health initiatives; conservation initiatives for wildlife; and the fight against trafficking, corruption and the control of a few individuals and multinationals over mining exploitation.

Selected by an international jury, the laureate will receive a €50,000 grant to carry out a 6-month field report with the support of the Fondation Carmignac, which produces, upon their return, a travelling exhibition and the publication of a monograph.

Open to all photographers, worldwide.

The candidate acknowledges that, if its application is selected, he/she will have to sign an agreement which defines the terms and conditions of the transfer of Intellectual Property of approximately 60 to 90 photographs taken during the reportage.