Competition C of the International Biennale of Architecture Krakow 2019 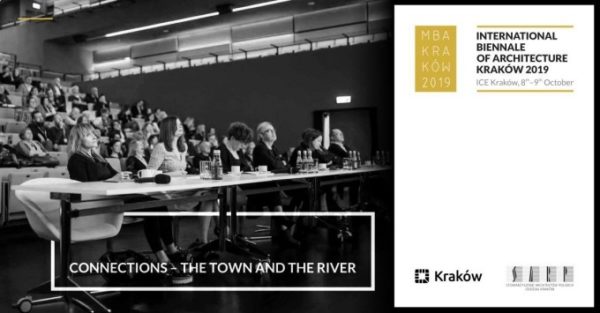 SUBJECT
of the MBA Kraków 2019
As the role of the historic European city centres changes, from an industrial base to a recreational, cultural and educational role, the situation of the urban rivers changes as well. The Vistula River running through Kraków, was once the central artery of transportation for the urban economy. That has changed. The river now gives the city a major recreational quality, with calm waters and green banks. Could this relationship between the city and its river now be reinterpreted, be given a stronger connection, a boost with new facilities, some new life and new functions, a new significance for the whole urban environment?

The Old Town of Kraków is still dominated by the mighty Wawel castle, towering over the river banks. North of the Wawel hill, the town centre, with the grand public space Rynek as its centrepoint, is contained within the boundaries of the old fortifications. This area, Planty, was turned into a lush urban park in the early 19th century. When this encircling park reaches the north side of Wawel and it is close to the river, for some reason it misses the connection. Could this area along the northern bend of the river, next to the castle, be ‘the missing link’ for the town, where the Old Town could meet the new recreational resources of the river and the historic significance of the castle? Could this area, between Planty and Vistula River, be where the 13 million annual visitors to the city could find new and exciting facilities, and where inhabitants could have an experience completing the urban narrative?

This area, squeezed in between the Old Town, the castle and the river, may give an opportunity to find some answers – through the uses of urban design, architecture and design – to some of the challenges that are raised. For new decades, with growing concerns for the environmental balance, with more frequent river flooding and also more emphasis on green and blue recreation, the connection between the town and the Vistula River could challenge a new generation of architects and designers to rethink their roles in historic urban development.

The Competition is open.

[Fields of exploitation] 1. Upon submitting work to the competition, the Authors - Participants of the
competitions – grant the non-exclusive license to the Organisers, regarding the copyright of the works in all
fields of exploitation that are mentioned in art. 50 of the Copyright and Related Rights Act, including
in particular the following exploitation fields ("Fields of exploitation"):
1) copying of the competition entry, collecting data, in whole or in part, without any quantitative
restrictions, by any available technique, including printing, photography, magnetic recording,
digital recording on CDs, DVDs, computer memory, and others, as well as any other technique
that is justified by the needs of the competition Organiser,
2) public broadcasting, closed-end broadcasting, and broadcasting through television, the Internet
and other mass media,
3) in the scope of the circulation of the original and copies on which the work was fixed,
in particular placing on the market, lending, letting or renting, also as a part of brochures,
studies, books and other publications in paper or electronic form,
4) use of the competition entry to print in the press and in other publications and to use the
competition work for the purpose of conducting all types of promotional and marketing
activities, including in particular promotion of the MBA both in Poland and abroad, whereas the
transfer of the license to each separate competition entry takes place upon its hand-over to the
competition Organiser. Acquisition takes place without time, territorial or quantitative
restrictions. In the event of new fields of exploitation, the Author agrees to obtain and transfer
to the competition Organiser the copyright to works in such new, emerging fields of exploitation;
and are committed not to terminate the license for at least 10 years.
2. From the date of granting the aforementioned license (in p.1) to each work (entry) in the Competition C,
the authors allow the MBA Organiser to exercise the derivative copyright in the compilation of works, and
the right to authorise the creation of compilation of works, where the law requires separate consent for
compilation of works.
3. Upon the release of the media carriers to the MBA Organizer, on which the works have been established,
authors transfer the ownership of these media to the MBA Organiser.
4. The authors declare that all works within the meaning of the Act of 4th February 1994 on copyright and
related rights (i.e. of 2006, Dz. U. [Journal of Laws of the Republic of Poland ] No. 90, item 631 as amended),
which will be used during creation of the competition work, will be original, without borrowing from works
of third parties and shall not infringe the rights of third parties, in particular copyrights and their personal
rights.
5. Submission of a photograph, or film to the Competition C, as well as a multimedia presentation for the
Competition B, is equivalent to assuring the competition Organiser that the work does not violate the rights
of third parties, and in particular dissemination of the work will not violate the right to protection of the
image of people visible on photographs, as the work complies with the requirements of Article 81 of the
Copyright and Related Rights Act (Dissemination of image requires permission of the person visible on it.
In case of explicit reservation, the permission is not required if the person has received an agreed payment
for posing. The following dissemination of image does not require permission: a well-known person, if the
image was made in connection with performing public functions, in particular political, social or professional
or a person who is merely a detail of a whole such as an assembly, a landscape, a public event).
6. In the event that, as a result of the breach by the author - competition Participant of the provisions
contained above, the use of the competition work by the MBA Organiser will infringe the property or personal
copyright of third parties, the Author is obliged to reimburse any sums incurred by the competition Organiser
to satisfy claims of these persons and to redress any damage that the competition Organiser shall incur
in connection with the exclusion or limitation of the possibility to use the competition Work.