Wildlife is full of personalities. Show us what you've captured! 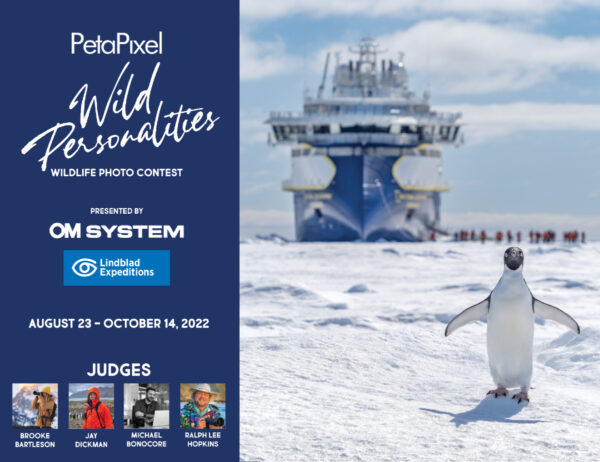 Have you ever dreamed of traveling to one of the most biodiverse locations on the planet? The Galapagos Islands, located 600 miles off of the coast of Ecuador, is known as a “living museum and showcase of evolution” where Charles Darwin’s theory of evolution by natural selection was formed following his visit in 1835.

PetaPixel is partnering with Lindblad Expeditions and OM SYSTEM to showcase your best wildlife photos in the Wild Personalities Photo Contest. The Grand Prize winner will receive an adventure for two aboard Lindblad Expeditions’ brand new National Geographic Islander II (a $19,580 value). In addition, the Grand Prize winner will be able to photograph Galapagos’ captivating wildlife with their brand new OM-1 camera body ($2,199.99), M.Zuiko 12-40mm F2.8 PRO II lens ($999.99), and M.Zuiko 40-150mm F4.0 PRO lens ($899.99). The total value of the grand prize is $23,679.97

Grand Prize:
One (1) Grand Prize winner will receive the following prize: Lindblad Expeditions voyage to Galapagos (Wild Galapagos Escape) for two in a Category SU suite aboard the National Geographic Islander II ($19,580 value) for departure by December 31, 2023. Departure date is based on availability by Company and subject to holiday and other blackouts: not valid on departures December 15, 2022-Jan 2, 2023; December 15-31, 2023. Cabin booking and confirmation cannot be made until 60 days prior to sailing. AND a Camera Kit including OM SYSTEM OM-1 & M.Zuiko 12-40mm F2.8 PRO II Lens & M.Zuiko 40-150mm F4.0 PRO Lens ($4,099.97 value). NOTE: The Grand Prize does not include, and the Sponsor will not pay for, airfare and other transportation to and/or from the location of embarkation. Grand prize winner must arrange for their own airfare and other transportation, accommodation, and spending money.

USA Only; 18 years of age or older

Entrants retain full ownership and copyrights to their Submission. Entrants also agree: (a) to be bound by these Official Rules; (b) that any claims related to this Contest shall be resolved individually without resort to any form of class action and that awards, shall be limited to actual out-of-pocket costs incurred in entering the Contest, and shall not include incidental or consequential damages or attorneys’ fees; and (c) that any actual or perceived ambiguities in these Official Rules shall be interpreted by Sponsor in its sole and absolute discretion.

Each winner grants to the Sponsor and Prize Sponsors and their designees an irrevocable, royalty-free, nonexclusive, worldwide perpetual license to use and distribute the entry (as submitted, or as cropped by the Sponsor or Prize Sponsors), and his/her name, city and state of residence for credit purposes, in any and all media now or hereafter known, including without limitation on Sponsor and Prize Sponsors’ websites, newsletters and social media for purposes of promotion of this Contest except as otherwise stated herein, without further compensation, notification or permission, unless prohibited by law.