Fighting for photojournalism as a necessary tool for social change 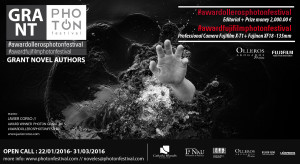 From it’s creation back in 2011, the PhotOn Festival has made an effort to dedicate a very important part of its program to support the works done by the novel authors, photographers who are not known by the public, through the PhotOn Grant, and which covers different activities such as the Portfolio Reviews of the 10 finalists and their Multimedia Screenenings. This year, we have some news. We change the prize of the exhibition to an editorial prize and the implementation of a small fee to participate, which will go back to the finalists by providing them free accomodation and lunch and dinner expenses during at least two days, depending on the amount earnt.

Among this new scenario, we launch the Open Call VI PhotOn Festival Grant with the following rules to participate.

Among the 10 finalists, the jury will select during the portfolio reviews sessions, ONE autor who will be granted with:

The award will be a prize money of 2,000 Euros sponsored by the Law firm Olleros Abogados SLP and the edition and production of a book or catalogue which will be part of the collection of edited books by PhotOn Festival.

The caracteristics of the book will be as follow: design and layout will be directed by PhotOn Festival Organisation. For that, the winner will have to provide the photographic material needed at 300 ppp, in máximum 30 days from the award winning date. PhotOn will print a minumum of 100 books which will be 50 for the winner, 10 for Olleros Abogados SLP and 40 for the Organisation. The usage of the book will be promotional and PhotOn will be able to sell it, with the agreement of the autor. The organisation, always agreed with the autor, has the right to reprint as many times needed.

Fujifilm Spain, as an independent judge and without the participation of PhotOn Festival and neither of the invites of PhotOn 2016, will select the winner of the #awardfujifilmphotonfestival among those same 10 finalists. The prize will be a Professional Camera Fujifilm X-T1 +Lens Fujinon XF18 – 135mm F3.5-5.6 R LM OIS WR, sponsored by Fujifilm Spain.

Both prizes will be announced during the activities week of the festival and in the official website: www.phoyonfestival.com next day.

For the purposes of public communication of photography, including making available online, award-winning author assigns such diffusion rights to Olleros Abogados, SLP and PhotOn Festival under non-exclusive and illimited period of time for promotional use with 4 images.

The author will indemnify Olleros Abogados, SLP and organization of Photon any liability for the dissemination of the winning work and, particularly, but not limited to, derived from intellectual property and image rights of any third party.

The award-winning author assigns his image, including his/her voice and name to Fuji España and PhotOn Festival (never the copyright and always crediting the author when the images are used) to be used and incorporated into any formats for the whole world territory, for an illimited period of time. To this end, the award-winning author, Fuji España and PhotOn will sign the relevant contract.

Those who aim to participate in the Open Call must meet the following requirements: 1. Only the Novel Authors over 18 years old will be allowed to participate in the competition. An author is considered a Novel Author regardless of age (above 18 years old), nationality or presidence, whose career has not yet been consolidated, has received no major award and has not seen his work published in the major media. The organization will check the biography of the author and the public information available, and all CVs of the finalist works. 2. Only unpublished work will be accepted; works that have not been communicated through publications nor exhibitions. No works with more than two years will be accepted unless they are still in the process of creation. Those works published in the author’s website for self promotion will be eligible. 3. The author is responsible for all liabilities arising from potential claims by third party rights related but not limited to intelectual property and rights over the images and/or claims from the people pictured on the stories, whether natural or legal persons exonerating the organisation of PhotOn Festival from any responsibility derivative thereof.

All the participants accept to be part of the PhotOn Newsletter to keep them informed of the latest news and informations about the festival. PhotOn Festival agrees not to sell the data to third parties.

The 10 finalists accept to grant the use of 4 of their images presented to the PhotOn Festival Organisation in order to use them in media and all kind of communication and saying always that it has to be published in the context of the Festival and to promote both the autor and the festivalsocial media, promotion of the authors and self promotion of the Festival.