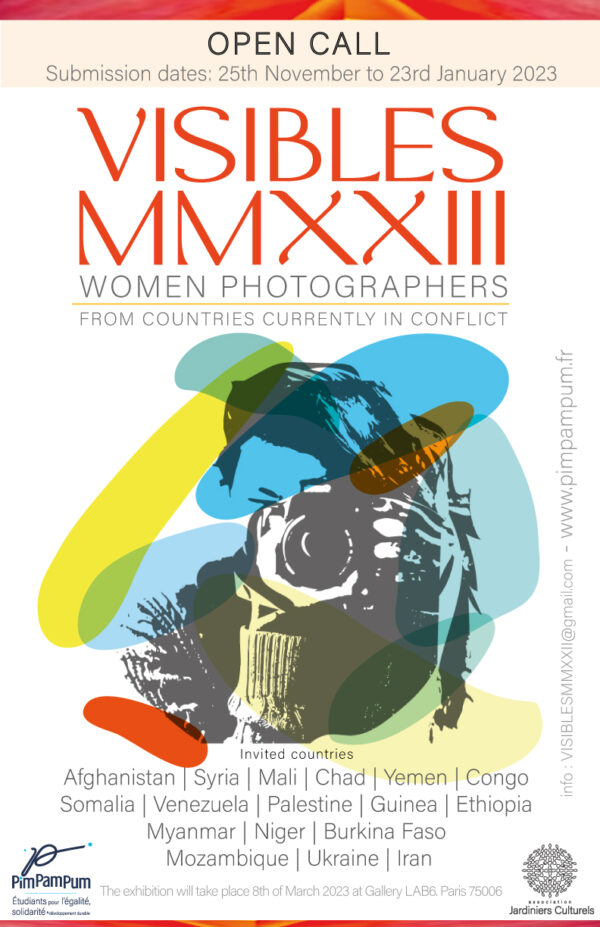 Being a female photographer in a field largely dominated by men is already challenging enough, but doing it surrounded by a national crisis that puts you and your loved ones in jeopardy shows a great level of strength and resilience. The women who are still producing great pictures under such circumstances deserve to have their work seen by everyone. To reward their bravery, we are looking to create a safe space and offer the opportunity of displaying the work of women photographers who, due to their living conditions, face great challenges to display their art. We firmly believe that these photographs, representing the photographer’s country, create a dialogue between the public and a reality determined by social or political crises currently happening around the world.

The NGO Pim Pam Pum invites the public to reflect through these women’s artwork on the lives of people living in dramatic and difficult situations. Through a free-themed exhibition in Paris, VISIBLES MMXXIII, we want to give visibility to the work of these women photographers and to share it with the whole world.

The VISIBLES photographic project was born, as was the organization behind it (Pim Pam Pum), back in March 2022 with the support of the Municipality of Paris and the Maison des initiatives d'étudiants. Our first exhibition was held at the Labo 6 gallery in Paris on the same month, and the public was able to enjoy 22 photos representing five countries (Palestine, Syria, Afghanistan, Ukraine, and Venezuela). In its first edition, the photographic project VISIBLES MMXXII was positively received both by the public of the Île-de-France and the rest of the country. For this reason, the organisation was invited to take the exhibition to other municipalities around the Île-de-France, Bordeaux and Strasbourg. We strongly intend to continue celebrating this event every year in March, hence why the call for this second edition has been scheduled for women's day and at the same place.

Our next edition of the VISIBLES exhibition, scheduled between the 1st to 11th of March 2023, will feature 23 award-winning photographs. The call for applications for this exhibition will be launched on the 25th of November (commemorating the International day for the elimination of violence against women), and the deadline will be on the 23rd of January 2023.

This year, we will award a special prize to one of the photographs linked to the situation of the resident's country and a second prize for the public’s favorite photo.
Call for applications:

PIM PAM PUM is a student’s association, a permanent team, professional advisors, and a community of enthusiasts committed to social action and sustainable development projects based on the UN 2030 Agenda. Our association was born at the Cité Internationale Universitaire de Paris e NGO PIM PAM PUM is organising the second edition of VISIBLES (the first one was held back in April 2022), an exhibition of photographs taken by women photographers. This call is addressed to women photographers currently living in countries under conflict.as a non-profit organisation.

The photographs will be exhibited between the 1st of March and the 11th of March 2023 at the gallery of Labo 6 in La Maison Initiatives Étudiantes de Paris in 76b Rue de Rennes, Paris, 75006.

This year, we will award a special prize to one of the photographs linked to the situation of the resident's country and a second prize for the public’s favorite photo.

The pre-selected photos may be shared to spread information about the competition by all media deemed useful by the organizer (social networks, mailings, newsletters…) At the end of the exhibition period, on March 11th 2023, if the organizer desires to use a photograph of one of the participants, an agreement specifying the planned uses, the media and the duration will be drawn up.